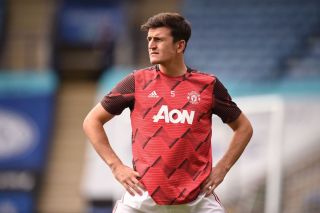 Harry Maguire will become the first Manchester United player to start every Premier League game in a single campaign in 25 years when he steps out onto the field to face former club Leicester this afternoon.

Captain Maguire leads United out in the winner-takes-all Champions League showdown at the King Power Stadium.

Ole Gunnar Solskjaer’s men simply have to avoid defeat against Brendan Rodgers’ side to secure qualification for Europe’s elite competition.

Otherwise, a defeat will mean they have to rely on Wolves beating Chelsea at Stamford Bridge to ensure a top four finish.

Maguire has come under plenty of criticism in his first season at United, much of which has been unwarranted.

Unrealistic expectations were put on the England international upon his arrival at Old Trafford due to his hefty price tag.

But he has become the first United player to start every league game in a single campaign since Gary Pallister in the 1994/95 season.

Maguire deserves credit for this incredible consistency and he has crucially given Solskjaer a dependable leader that he can rely on.

See the impressive stat below, via top statistician Statman Dave on Twitter:

Harry Maguire is the first outfield Man Utd player to start every Premier League game in a single campaign since Gary Pallister in 1994/95.