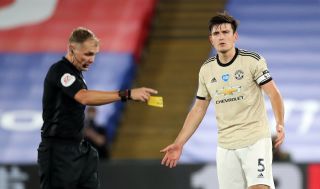 Manchester United captain Harry Maguire has made it clear that the Red Devils will be going to the King Power Stadium to win.

Speaking ahead of his return to play his former club, Leicester City, Harry Maguire told MUTV: “We won’t be going to Leicester and playing for the draw, that’s for sure.

“We’ll go into the game wanting to win it. We want to get the three points; we’ll approach it like we approach any other game.

“Maybe if we’re drawing in the last couple of minutes, we might approach it a little bit differently but for sure we’re going to go into the game and try to get the three points.

“We’re sat third in the league and that’s where we want to be by the end of Sunday.”

Maguire is set to become the first Manchester United outfield player since Gary Pallister (1994-95) to play every single game ion the Premier League season for us.

A remarkable feat in his first season at the club, especially when you consider the problems we’ve had for years keeping our defenders fit.

The likes of Phil Jones, Eric Bailly and Marcos Rojo have been prone to injuries — probably due to the fact they can be overly reckless when putting in tackles.

Maguire will need to be at his best today to keep Leicester striker Jamie Vardy quiet. Like David de Gea, he has been guilty of making some mistakes this season and none of those can be afforded today.

Relying on the Europa League to get into the Champions League is one thing, but United should be looking to secure third place today before taking a well-deserved break to prepare for the Europa League latter stages.