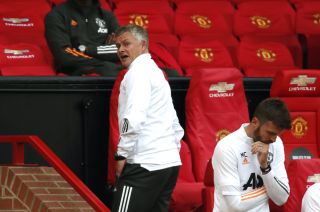 Manchester United manager Ole Gunnar Solskjaer has suggested his side will go to the King Power Stadium and play a positive, attacking game against Leicester on Sunday.

The crucial encounter will end and we’ll know the Premier League’s top four for this season. That means we’ll know if we are back in Europe’s biggest competition before resuming our Europa League schedule.

Finishing third or fourth tomorrow shouldn’t change our aims to win a European trophy this season, and I hope we see lots of positive football between now and when the 2020 Europa League is decided.

An away win would guarantee United third place and that’s all we are going to focus on right now because we should be coming away with three points tomorrow.

“We know Leicester are a good side and they’re going to pin us back at times and we’re going to have to defend our box as well, so stop crosses, if the crosses come into the box get first to it. All the basics in football.

“And you know you have to work really, really hard. You have top go there with a frame of mind that, ‘when I’m off the pitch today, I’ve given everything I have for the shirt’ — and hopefully that will be enough for a result.

“You can never control the result in a game of football, you can only control your effort in the performance.”

United cannot start the game tomorrow with a draw in mind, they must go there a win. That is what Solskjaer is stressing.

By getting there first in defence he appears to be issuing a warning to Victor Lindelof who can be slow to react in moments, but no United defender has a clean plate in recent weeks. They must all take note and put in a solid display.

He dismissed concerns that fatigue had crept into the squad — a pretty fair concern given our performances against Chelsea and West Ham.

“I just want to see them do what they’ve done over the last five or six weeks, go out there with a smile, express themselves, play with no fear, play with courage, go and attack teams, go and drive at them, create chances and defend well, like we have done.

“We have proven over the last five or six weeks that we are one of the fittest teams and one of the strongest teams.

“But all the other teams you’d feel a little bit of wear and tear, aches and bruises. I wouldn’t worry about my players at all in that respect. They’ll be sharp, fresh and ready.”