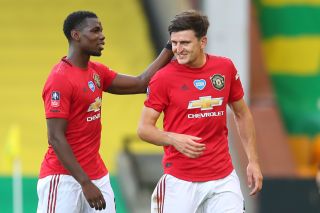 Leicester City host Manchester United in a winner-takes-all Premier League finale for Champions League football. It’s where both clubs want to be next season and it’s the least United fans should be expecting each season.

But Brendan Rodgers’ Leicester had looked nailed-on for a top-four finish when the season restarted in June. At one point people were questioning whether they could run Liverpool and Manchester City closer for the top two places, though that was an embarrassingly premature judgement and an obvious step too far.

The race for Champions League qualification is fierce and I don’t remember it being this tight as we go into the final day of the season, with United (third) and Chelsea (fourth) — both just one point ahead of Leicester in fifth.

While Leicester have thrown away their amazing form from earlier this season, United went on a really impressive run since the restart to put them one result away from a top-four finish. Ask any Red about our situation now and they would have snapped your hand off at the beginning of the campaign.

On Sunday we must avoid defeat at the King Power Stadium — and give the Foxes a lesson on Real Football.

Kick-off is scheduled for 4pm BST on Sunday, July 26, 2020. It will be shown live on Sky Sports Main Event and Sky Sports subscribers can stream the match online via SkyGo.

We are not expecting Eric Bailly to return for this one after sustaining a head injury in the FA Cup semi-final defeat against Chelsea at Wembley, while Phil Jones and Axel Tuanzebe remain sidelined.

Solskjaer will be relying on Harry Maguite and Victor Lindelof to stop Jamie Vardy, however, Rodgers has injury problems of his own since the restart.

It’s good news for United that the defender who stepped in to replace Maguire, Caglar Soyuncu, is suspended for the match. The Foxes could still be without key trio James Maddison, Ben Chilwell and Ricardo Pereira due to injuries.

It will be a cagey affair this weekend in arguably the most important game of the weekend — unless you support Aston Villa, Watford or, erm, Bournemouth.

A point would be enough for United but we want to be going there with a win. Our defensive record may be better this season, but we’ve still conceded eight in our last four games, which is worrying to say the least.

The ball needs to find Bruno Fernandes in the middle with the forward players alert at all times. We can’t afford to start this game slowly.