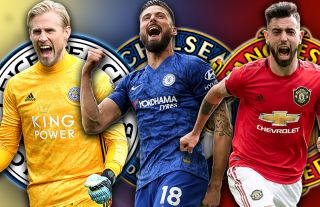 The Premier League is set to draw to a important conclusion this weekend as Manchester United, Leicester City and Chelsea all seek to finish inside of the league’s top-four spots.

What does each side need to happen in order to finish inside the top-four?

The Reds need to avoid defeat against Leicester City in order to clinch Champions League football. However, should they only manage to draw and Chelsea win, United will slip from third place to fourth.

Chelsea similarly to United need to avoid defeat against Wolves. Frank Lampard’s Blues can only afford to lose if United beat Leicester in a scenario which would see Chelsea pip Leicester City to fourth place by just one point.

Simple for the Foxes. They cannot lose. Brendan Rodger’s side either need to take all three points from Old Trafford or snatch a draw and rely on Wolves beating Chelsea; in which case, Leicester City will pip Chelsea to fourth place on goal difference.

Final table based on scoreline predictions

Although United were still in the FA Cup when the season restarted, it feels like our focus has been firmly on getting into the Premier League’s top four. It’s amazing to think we still have a route into the Champions League by winning the Europa League, but we’ve not had a chance to think about that with domestic games being played at a hectic rate. The players are clearly shattered but they cannot waste this chance to make a statement, especially if they’re to lead fans to feel optimistic about a title challenge next season. That needs to be the aim as well as getting into the Champions League. I’m predicting United to win 2-1 on Sunday and Chelsea to get fourth after being held to a draw against Wolves.