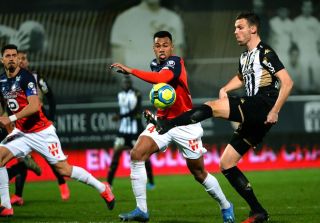 According to the Daily Record, Manchester United have entered the race to sign Lille defender Gabriel Magalhaes.

It’s no secret that Ole Gunnar Solskjaer needs defensive reinforcements this summer after bringing in Harry Maguire and Aaron Wan-Bissaka last summer. The improvements are clear to see but it’s not error free just yet, so more work is required.

Eric Bailly had more injuries this season, as did Axel Tuanzebe, and most of us have come to the conclusion that Marcos Rojo is not much more than a liability.

While you see Victor Lindelof start most games I’m not convinced he’s anywhere near good enough. It would compliment Maguire to have a quicker centre-back alongside him and someone equally good when taking the ball out of defence and forcing transitions further forward.

The Norwegian is said to be considering a move for Lille centre-back Magalhaes, who is valued at €25m, but the report suggests there will be competition for his signature from the likes of Everton, Napoli, and Inter Milan.

We could see Rojo, Chris Smalling and Phil Jones all leave the club this summer. In that case we definitely need to sign at least one centre-back.

P.S. Calciomercato are linking us with a move to sign Inter Milan defender Milan Skrinar.