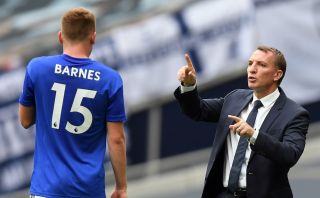 The crunch clash sees Leicester City play host to Manchester United with a place in the top-four up for grabs. Win or draw and United will qualify for next season’s Champions League. Lose, and we run the risk of losing out on competing in Europe’s most prestigious competition next season.

I caught up with Shane to get some perspective from our upcoming opponents. Read our Q&A below:

Dale O’Donnell: How disappointing will it be if Leicester City miss out on Champions League football after being so far ahead and being labeled potential title contenders early on this season? The momentum seems to have collapsed…

Shane Evans: “Hugely disappointing. It was almost a formality earlier in the season and it’d be such a let down after playing so well to start the season. The squad is immensely talented and youthful but perhaps the cohesion wasn’t there for a 38-match schedule. It seemed too good to be true back then in the autumn of last year and the form recently has shown that. Having said that, what better situation for the supporters than a winner-take-all final fixture? I know Foxes supporters won’t be as chuffed about it but it wouldn’t be the Leicester way if it were easy.”

SE: “Breath of fresh air. Leicester’s ownership group has done a tremendous job not going after the same manager in the numerous searches over the years. Ranieri was almost the polar opposite to Nigel Pearson. Rodgers is a huge departure from Claude Puel… and he’s brought a lot of life into the club. Puel wasn’t a popular choice and seemed destined to fail, especially with his cold demeanour and inability to win over the fans. Rodgers has delighted the home crowds and has provide a strong winning pedigree after his previous successful stints in British football.”

DOD: Are you confident ahead of Sunday’s game?

SE: “Yes, very confident. We have this player by the name of Jamie Vardy who has a knack for scoring goals against the ‘big clubs’ and wouldn’t be surprised if he is able to do it again and help the Foxes across the finish line. Won’t be the same without the fans at the King Power Stadium but we’ve had a few good matches against United at home over the last few years so feeling strongly that that run may continue.”

DOD: Would you take any of the following United players at Leicester next season: Phil Jones, Marcos Rojo, Jesse Lingard, Andreas Pereira?

SE: “I would. Jones or Rojo would fit nicely with the three-at-the-back system we’ve employed primarily since the restart. Alongside Evans and Söyüncü, either of that pair could improve the setup. Lingard (a former Leicester loanee) and Pereira would have a bit more trouble getting into the side, to be honest, and not an area we’d need United cast-offs.”

DOD: Can Leicester build on this season’s form and compete next season?

SE: I’m excited for next season. The squad needs some freshening up, particularly at the back (especially if Chilwell leaves) but the depth is there and there is key young talent all over the pitch. If they spend wisely, which remains a doubt given the tightened purse strings throughout the game, the quality is there to be in the mix again next season. I worry that the reliance on Vardy could be an issue so finding goals elsewhere will be a priority for success.

DOD: Give us your match prediction.

SE: I hate to say it but think a 1-1 draw is most likely but stranger things have happened at the King Power and I would not put it past Leicester to grab a late winner and complete a crazy end to a fragmented campaign.