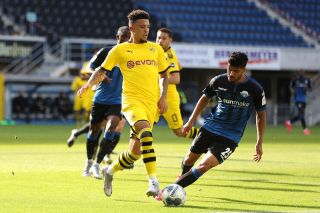 On Friday afternoon, reports emerged that Manchester United were exploring either a loan or permanent deal for Bayern Munich winger Kingsley Coman. Although Coman is a serial title winner wherever he has been, the arrival from the blue side of Manchester of Leroy Sane was speculated to push Coman further down the pecking order in Bavaria.

Coman is 24-years-old and pacey but has suffered from a catalogue of injuries throughout his career. Whilst Coman’s name brought excitement from some sections of the United support, it has been well documented that United’s unequivocal priority to bolster their right-wing slot is Borussia Dortmund’s Jadon Sancho.

The news broke from respected journalist Andy Mitten (via The Athletic), who is well connected with all matters Manchester United. Credit where it is due, after Sport Bild’s chief football writer Christian Falk swiftly refuted the Coman talk, citing Manchester City’s interest in the Sane deal as dampening evidence, Mitten defended the source of his story featuring in the Athletic and has told me that the talk came from Coman’s camp first.

My initial thoughts were this was more public bartering from United, reminiscent of the story Sky Sports ran saying the club were not willing to spend more than £50m on Jadon Sancho, which Stretty News understands was inaccurately reported. So I messaged Andy asking whether this could be interpreted as another bit of pressurising from the club to try and force Dortmund’s hand on Sancho.

Andy’s response was affirmative and that it can be seen as deliberate tactics by United to bring forward a deal for Sancho. The monetary aspect will, of course, become clearer once it is known whether United will be playing in the Champions League, which a draw at Leicester on Sunday afternoon will achieve. Failing that, United will enter the pressure cooker of the Europa League, knowing it rests solely on winning that competition.

Let’s see if United can get Sancho over the line, or whether the interest in Coman develops. One thing is for sure, with the transfer window opening on Monday, the talk is starting to ignite.