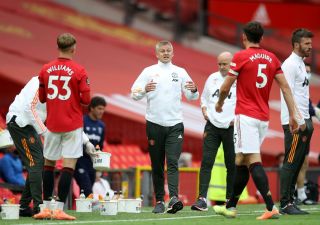 The 2019-20 season is coming to a close and Manchester United still have a lot to play for despite being knocked out of the FA Cup semi-finals last weekend.

We were hopeful of a positive response to the 3-1 defeat against Chelsea but United were lacklustre in their 1-1 draw at home versus West Ham. It was a chance to increase the gap on Sunday’s opponents Leicester City but we’d still have to win the game regardless.

A draw would be enough to secure Champions League football next season but United are aiming for third place and know they’ve a lot of work to do in order to catch Liverpool and Manchester City.

That has to be the aim.

“Let’s get this game out of the way and get the third position and continue the growth and journey this team is on,” Solskjaer said during his press conference this morning, as per the Manchester Evening News. “We’ve had some hard times this season, some setbacks, we’ve shown this is a team going places and if we can finish the season with a trophy in Europe and third.”

If you told any Red before the Premier League’s restart that United would go into the final day of the season with the prospect of a Champions League spot in our own hands, I think most fans would have snapped your hand off.

I’ll be nervous all weekend, but all in all, I’m happy. This is the biggest game in recent memory.

Solskjaer was asked whether the upcoming clash against Leicester will be the toughest test of the season.

The boss responded: “We’ve not ended up anywhere yet, one more game to show we’ve become a better team and if we get a result against Leicester, this journey has been a good one but this is not the end of the journey, days to breathe and relax, go again, go to the next one, there are two teams too far ahead of us. We have to step it up even more.”

We’ll be up against ex-Red Jonny Evans who has been a mainstay in Brendan Rodgers’ side this season. They have several injuries going into the match.