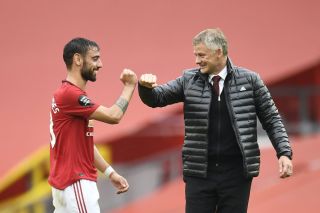 Speaking ahead of Sunday’s top-four decider against Leicester City manager Ole Gunnar Solskjaer has pin-pointed the one player who has helped turn the Red’s fortunes around. Sitting in third place in the league and competing for Champions League football seemed like a distant ambition back in December last year after the Reds suffered an embarrassing 2-0 defeat to Burnley, however, Solskjaer believes Bruno Fernandes’ presence has been the catalyst behind a flourishing dressing room.

United will go into Sunday’s game as the clear favourites to clinch one of two available top-four spots, but the United faithful will do well to cast their minds back seven or eight months, back to a time when this position looked nothing more than a dream.

The Reds have rarely been inside of the league’s top four places after failing to string together a run of consistent form.

Matchday 20 saw United suffer one of their worst defeats in recent memory as Sean Dyche’s Burnley piled the pressure on gaffer Solskjaer after a 2-0 defeat at Turf Moor.

However, since his side’s awful display against Burnley back in December, Solskjaer has managed to guide his team to a 13 domestic game unbeaten run.

Speaking earlier today about his side’s upturn in form, as quoted by Manchester Evening News, Solskjaer said: “Many many factors, many reasons, belief, if you look at that game against Burnley we should have won that one, that’s football and the Premier League. The belief, confidence, change of atmosphere, Bruno coming in has made a massive difference.

“We’ve got our best players fit and raring to go, it’s been many different reasons for the upturn but it’s been down to the work, step by step believe and the boys have worked really hard, the fitness levels, the mental robustness is so much better than last season.”