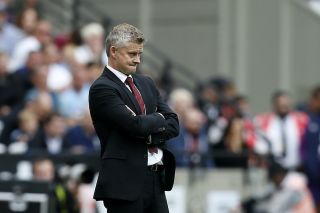 Manchester United manager Ole Gunnar Solskjaer has issued an update on two first team player’s current fitness ahead of the league’s final day on Sunday in a game which will see his side showdown against Leicester City with a place int he top-four up for grabs.

United will go into Sunday’s crucial match in third place knowing all they need to do is avoid defeat to fellow top-four challengers Leicester City in order to secure Champions League football next season.

Tho centre-backs have yet to feature for the Reds since the sport resumed last month and that doesn’t look set to change anytime soon as Solskjaer said as quoted by Manchester Evening News: “Axel (Tuanzebe) and Phil (Jones) are out but the others I’ll give time to prove their fitness.”

Solskjaer is expected to name an unchanged side to the one which turned out in their last game against West Ham which saw them come back from 1-0 down to draw 1-1 which saw the side grab a much needed point.

Addressing the squad’s overall fitness, Solskjaer said: “The boys have worked really hard, the fitness levels, the mental robustness is so much better than last season.”

Read more: Solskjaer highlights star who has made a massive difference to United’s team mentality