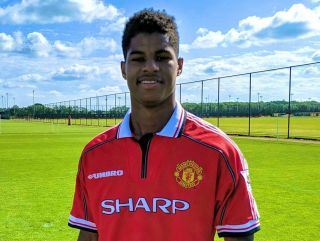 The iconic Sharp sponsored kit will go down as one of, if not, the most recognised United kit of all time.

The classic kit was worn during a season which saw United complete the famous treble having won the Premier League, FA Cup and Champions League after famously beating German giants Bayern Munich 2-1 in injury time.

Rashford will be hoping he can help the Reds create even more iconic moments as his side push to get back into next season’s Champions League.

Just a few pictures of a certain @MarcusRashford adorning the #Treble #Winning kits of the 1998/99 season, also featuring the famous #UCL shirt ⭐️⭐️🏆