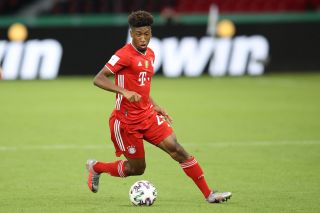 Manchester United have held talks about Bayern Munich’s Kingsley Coman, according to The Athletic.

Reported by respected journalist Andy Mitten, founder and editor of popular Manchester United fanzine United We Stand, he claims Coman has been watched extensively by the club.

This shows United are not limiting their transfer options to Jadon Sancho this summer, and it gives us a bit of backbone at the negotiation table. It may even see Sancho go AWOL if his dream is to return to the Premier League and be a star for United…

Mitten stresses in his report that any negotiations with Dortmund are not expected to be easy. Sancho may be prime target but there’s uncertainty following the impact of COVID-19 as we’ve suspected for some time.

Coman is understood to be keen on a move to United whether it’s a permanent or loan deal. He would add to the French contingent in the dressing room: Paul Pogba and Anthony Martial.

At the age of 24-years-old, Coman has played for Paris Saint-Germain, Juventus and Bayern Munich. That’s a lot of big clubs for such a young player, so his ability is not under question. This is a player who has won the league title in each of the last eight seasons across the three clubs. A good omen?

A winger who can play on both flanks would suit Ole Gunnar Solskjaer’s team nicely, though I cannot stress how much more I would like Sancho this summer.

United seemingly saw the opportunity to approach Coman after being made aware they’d be signing Leroy Sane from Manchester City. He will have a lot to prove if he’s to join the Reds.

Read more: 5 moments that made the 2019-20 Premier League season for Manchester United fans