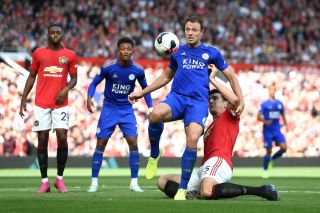 Former Manchester United centre-back Jonny Evans has revealed that he told current defender Harry Maguire to join his old side but has admitted even he was shocked how quickly he became captain.

From West Brom, Evans later joined current club Leicester City in 2018 and is now focusing his attentions on helping the Foxes secure Champions League football next season ahead of his former side United.

Ahead of Sunday’s showdown between United and Leicester City Evans has revealed to MUFC Group Chat how he advised ex-Leicester defender and current United captain Maguire to join the Reds, saying: “When Harry signed for the club he had a decision where to go. I told him to go to United because it was the perfectly made club for him.”

Despite Maguire’s departure from Evans’ current side in 2019, Evans has admitted that the Englishman’s quick transition to become club captain took him by surprise, he said: “I said that within a year at the club that he’d be captain and when he got given the captaincy I text him and said: ‘That was quicker than what I expected!’. I think he’s got the perfect personality for it.

“If you look at Harry, he never gets injured, he’s played all season and I think he’s been a really good signing for United.”