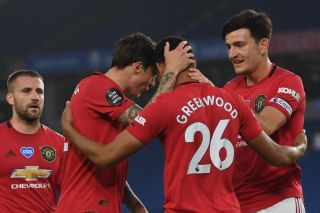 Manchester United captain Harry Maguire has issued some high praise for his teenage sensation team-mate Mason Greenwood and tips the youngster to play an important role in Sunday’s league finale.

Greenwood, 18, has endured an impressive break-out season having scored 10 goals in just 11 Premier League starts as his captain tips him to start again this weekend.

The young superstar who is being dubbed one of Europe’s most exciting prospects is expected to start on Sunday having looked the most lively United player in recent matches.

Greenwood’s side are set for a dramatic final day showdown on Sunday against fellow top-four contenders Leicester City in a game which will decide which one of the two secures Champions League football next season.

All United need to ensure is that they avoid defeat to Brendan Rodgers’ Foxes this weekend as the pressure reaches boiling point.

The Reds currently sit third place in the Premier League table on 63 points separated only on goal difference from Chelsea as Sunday’s rivals drop to fifth place on 62 points.

Speaking to talkSPORT, United captain Maguire has issued some high praise for Greenwood who he expect will play a part in Sunday’s outcome, he said: “When he gets in that box and he can manoeuvre his feet and he can manoeuvre it to either foot, he’s a nightmare for defenders. I know from training,” he said.

“But he’s been excellent, it’s great to see him playing with confidence.

“He always seems to be on the scoresheet, especially since we’ve returned from lockdown.

“He’s a special talent and he’s going to have a big future at this club.”