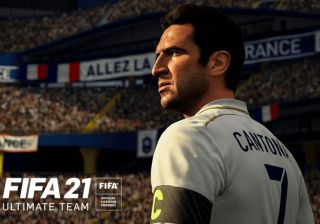 Icon Ultimate Team items on FIFA are awarded to football legends that are no longer playing the game.

And now some lucky supporters will have a chance to play with ‘King’ Cantona when the latest version of the game is released in October.

Cantona was revealed as an Icon in an official trailer ahead of the new release, which the Frenchman stole the show in as narrator.

See the official trailer below, courtesy of EA Sports FIFA: