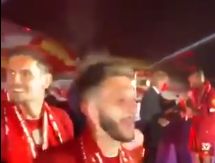 The former Leeds United and Man City player can be heard speaking to his team-mates about how it’s the first time he’s wanted to see red ribbons on the Premier League trophy.

He quite clearly has no time for Manchester United after having his childhood ruined as a Leeds fan, calling us “f***ing w***ers” to the amusement of his team-mates.

Milner won the Premier League previously as a City player and this is another special moment for him, but it says a lot that he couldn’t do it without mentioning United…

I guess watching us win it year after year when you’re a Leeds fan is going to be difficult, but I hope we return to those ways soon. It would be nice to get Milners thoughts then!

Check out the video below as Milner shared his thoughts on United after Liverpool lifted the Premier League trophy.