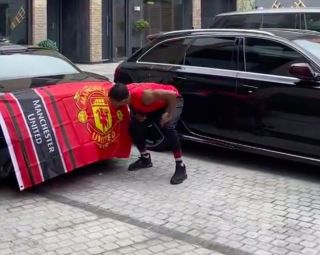 Patrice Evra couldn’t resist a cheeky dig at Liverpool while congratulating them for winning the Premier League title.

Liverpool finally lifted the league title on Wednesday night after ending a 30-year wait to become Champions of England.

United supporters have had time to come to terms with the success of their bitterest rivals, but this wouldn’t have made it any easier for supporters who had to endure the trophy presentation at Anfield after the 5-3 victory over Chelsea.

Evra, who remains a passionate United fan, has become renowned for his bizarre Instagram video’s, and his latest one includes him driving a sports car, kissing the badge and jumping on another vehicle.

The United great congratulated Liverpool’s players and staff for their triumph but also joked that the last time he had seen them win the league was when he was nine-years-old.

See Evra’s hilarious video below, via his Instagram page: