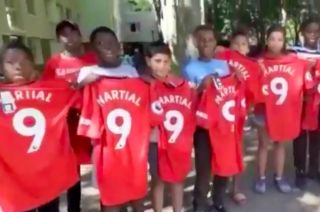 Anthony Martial has rewarded the winners of a youth football tournament in his native France.

As noted by Man United Zone, the Manchester United striker has paid for jerseys with his name on the back for the triumphant side in an U13/14 competition.

A video shows the next generation of footballers clearly delighted at the brilliant gesture from Martial.

It’s always encouraging to see United players do these kind of selfless acts as it shows there are good personalities within the dressing room.

Martial’s attacking partner Marcus Rashford has made plenty of headlines for his work off the field this year, raising millions for the most vulnerable families through his support for charity FairShare and initiating a government UK U-turn over their decision on suspending free school meal vouchers.

The 24-year-old has scored 22 goals in all competitions this term and should surely soon be rewarded with his first international call up in over two years.

See the video of the French youngsters thanking Martial for their prize below, via United Zone:

Video: Anthony Martial paid for jerseys as a gift for the winners of a U13/14 tournament in France.