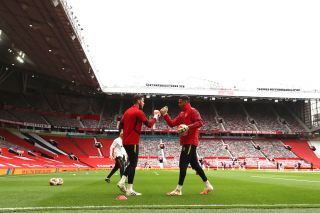 Sergio Romero is reportedly considering his future at Manchester United after twice being overlooked despite the dismal form of David de Gea.

Romero is completely understanding of his role as De Gea’s understudy at Old Trafford, but was surprisingly not selected for Sunday’s FA Cup semi-final against Chelsea despite starting in every other round of the competition.

And according to the Metro, sources close to Romero said he was left frustrated at not being given the chance to help United reach the final.

De Gea’s horrific display would have only intensified Romero’s frustration and many suggested the Spaniard would be dropped for Wednesday’s Premier League match against West Ham.

Instead, Ole Gunnar Solskjaer refused to drop his number one, which has thrown Romero’s future at the club into doubt.

The Metro notes that Romero has been disheartened by Solskjaer’s selection decisions in the past two games, feeling he should have been given the opportunity to play.

Romero has been the model no.2 at Old Trafford for five years now, though if there is something he has been guilty of it is not pushing De Gea hard enough for the number one spot at times.

But the Argentina international’s dejection at being overlooked again is somewhat understandable given he has seldom let United down between the sticks.

Romero has 12 months left on his current deal and United have an option to extend a further year, but the 33-year-old may see his future elsewhere.

The uncertainty around Dean Henderson’s future could also be causing more unease as Romero is still unsure whether the youngster will return to fight for a starting berth with De Gea.

Romero’s 96 international caps are proof that he is still capable of being a number one at a high level so he is unlikely to be short of suitors if he chooses to move on this summer.