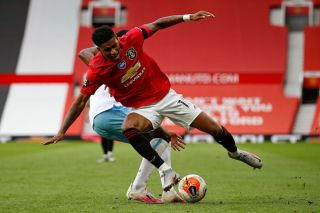 Marcus Rashford’s representatives have hit back at the criticism he has been receiving since the restart last month.

Rashford was singled out by large sections of the fanbase who were frustrated with his performance in Manchester United’s 1-1 draw against West Ham at Old Trafford.

The England forward was superb against Crystal Palace at Selhurst Park, but struggled to make a similar impact in the FA Cup semi-final defeat to Chelsea at Wembley and against West Ham in a drab United display.

It’s easy to forget Rashford was sidelined for six months with a double stress fracture in his back in January and only just returned to full fitness for the restart.

That is pointed out by his representatives D N May Sports Management who suggest he is still building himself back up from a ‘potentially career-ending injury’.

Had the Premier League not been suspended due to the coronavirus pandemic, Rashford would have missed the rest of the season and may have been a doubt for the European Championships.

Rashford has scored 21 goals for United in all competitions despite his lengthy absence, and is enjoying his best goalscoring season to date.

See his management’s defence below:

Lots said about the fitness of Marcus yesterday what's incredible is that I am sure the boy is building himself back up to fitness from a potentially career-ending injury. United is a team that win together and lose together ⚽