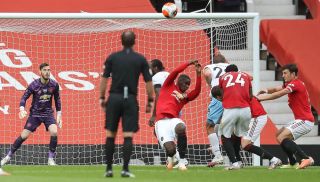 Shortly after Michail Antonio casually converted his late first-half penalty to give West Ham the lead over Manchester United, the Twitterverse and Stretty News’ own Facebook feed exploded with outrage at Paul Pogba. I won’t single anyone out, not even if their first initial and surname combine to make the sound of a body hitting the cobblestones after jumping off the roof of the Beetham Tower or, for that matter, the sound the ball would have made on impact had the Frenchman not reflexively raised his arms to protect his commercially priceless visage.

And make no mistake, it was a reflexive action. At half-time, NBC studio host Rebecca Lowe admitted she’d have raised her hands. More surprisingly for the sexist among you, former Port Vale and Wimbledon midfielder Robbie Earle confessed he would have done the same. He suggested it took a disregard for one’s own safety on the level of a John Terry to permit a missile like the one launched by Declan Rice take you out.

Such is the dichotomy among United supporters that I suspect a poll of Pogba haters would reveal almost unanimous approval for David de Gea retaining his starting role after yet two more gaffes in a season filled with directly led to Sunday’s FA Cup semi-final defeat to Chelsea, much less a draw. Surely, they were extremely delighted to view the target of their malice’s disapproval when Michail Antonio mimicked him just before the second-half kicked off. That’s if they happened to be watching. For many, the costly action was enough to send them careening along the information superhighway, expressing their road rage deep into the second half.

Not that missing any of the action mattered. The haters would have been unmoved when Pogba delivered the through ball that set up the combination play between Anthony Martial and Mason Greenwood resulting in the latter’s equaliser, much as he provided the second assist on Marcus Rashford’s leveller after twice being dispossessed against Southampton. Television analyst Andy Townshend overlooked Pogba’s involvement, later claiming the star’s failure to assume a more advanced position kept Bruno Fernandes from making an impact, as if the attacking midfielder failed to do much for the club until the Frenchman returned to the line-up.

Detractors would have been equally unimpressed with Monsieur Labile on his horse, legging it more than half the length of the pitch after the pacy Jarrod Bowen, finally accelerating to ride him directly into Harry Maguire’s path for the captain to snuff out a second-half Hammers’ counterattack. Rather, they will insist he did not respond to his mistake.

Never mind that, when neither of the attempts on goal came off in the Reds entirely dominant opening two minutes of the game, the squad took their collective foot off the gas. Overall, United’s performance lacked the required urgency to put West Ham away.

Other than one dipping volley from the left flank, Rashford’s play was uncoordinated. Several players, including Greenwood and, when he came on in the second half, Aaron Wan-Bissaka, made errant passes that let David Moyes’ side off the hook. Late on, Nemanja Matic, in an attempt to wake up his teammates, made enough rash challenges to pay for his dermatologist’s annual Canary Island holiday.

But the most suspect player on the evening wasn’t Pogba or De Gea. Rather, Bruno continually misfired with his passing, lost the ball in his feet or overran it repeatedly, frustrating himself to the extent he ended up engaged in a late tete-a-tete with Hammers left-back Arthur Masuaku.

The Portuguese’s recent dip in form is a cause for concern. Hopefully, it’s merely fatigue rather than the pressure of being the first name Ole Gunnar Solskjaer’s written on virtually every team sheet since the restart.

The draw against West Ham gives United the advantage when they take the King Power pitch on Sunday against Leicester City. A draw puts them in the Champions League. Victory wouldn’t have done much more for the Reds in that regard unless it was by three goals or more. It could have exerted greater pressure on Chelsea, however, in the evening’s later match against Liverpool.

Still, United’s destiny remains firmly in their hands. If they can claim a result against the Foxes on Sunday, the season can be considered a success. Afterwards, Ole can rest his tired regulars for the home leg against LASK in the Europa League.

And for those of you who counselled patience with regard to David de Gea, respecting his talent and past contributions to the team, remember the manager’s rationale for keeping faith with the Spaniard.

“Form is temporary; class is permanent.”

Whether you fancy him or not, anyone who’s seen Paul Pogba at his best knows the man is class.