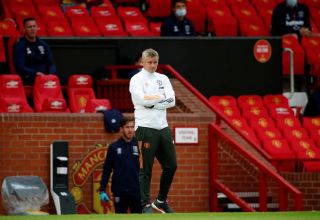 Manchester United are reportedly expected to sign Borussia Dortmund winger Jadon Sancho this summer – yet the transfer could still hinge on the crucial game against Leicester City on the final day.

According to the Independent, there is a confidence within all parties that the proposed transfer for Sancho to United can go through, but the deal will be complicated if the Reds miss out on Champions League football.

Ole Gunnar Solskjaer’s men must avoid defeat on Sunday away to their top four rivals in order to secure a place in Europe’s elite competition next season.

Otherwise, they will have to rely on a favour from Chelsea who would have to lose against Wolves, or win the Europa League which resumes next month.

And Sunday’s result is likely to have a huge bearing on United’s chances of signing their priority target Sancho this summer.

The Independent’s report claims Sancho’s representatives believe no Champions League football is almost a deal-breaker, which is why negotiations have not yet reached an advanced stage.

Also, United’s ability to spend would be inhibited meaning they may not be able to meet Dortmund’s asking price.

But the report adds that Solskjaer would still be confident of acquiring Sancho , regardless of whether they finish fifth and don’t win the Europa League.

The 20-year-old is one of the most coveted attackers in world football and could take United’s attack to the next level with his cutting edge in the final third.