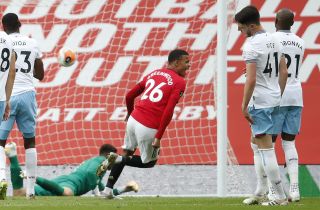 The former England striker has been atop of the goalscoring charts after getting his name on the scoresheet 260 times for Southampton, Blackburn Rovers and Newcastle United. He is renowned as one of the greatest strikers to have played in the Premier League.

Moreover, it’s a record that has been in his hands for years but he thinks Greenwood has what it takes to make it his own. Wayne Rooney is the closest to Shearer for goals in the Premier League, ending up on 208 goals but with more silverware than the Geordie could dream of.

Greenwood scored his 10th Premier League goal in a 1-1 draw with West Ham last night — becoming the first teenager to hit double figures in the English top flight since Rooney.

⚽️✖️1️⃣0️⃣@masongreenwood becomes the first English teenager to reach double figures for goals in a @premierleague season since @WayneRooney in 2004-05! 👏pic.twitter.com/zRQ1h99ImV

Shearer thinks the United youngster is the real deal.

Speaking on BBC’s Match of the Day, Shearer said (quoted by the Manchester Evening News): “A potential superstar. I respect the power, left foot, right foot, and the way he gets his shot away early, he doesn’t give the keeper a chance to set himself.

“Whether it’s near-post or far-post. Everything is power, head down and hit it as hard as you can.

“I was taught at Southampton, by my old youth coach Dave Merrington, to concentrate on that right foot and make it unstoppable.

“Now, he can do it with his left or right foot. He gets it away early and the goalkeepers have no chance. Tonight was exactly the same. Watch how he takes it early.

“I think in 12 or 13 years time, we could be talking about a Premier League record goalscorer.

“I know there’s so many things that can happen in someone’s career. But I think he’s that good.”

Greenwood made his 50th appearance for United last night which shows how far he’s come in such a short period of time. The sky is the limit and it will be interesting to see how many more goals he will add to his Premier League tally next season.