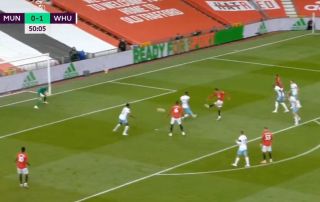 Manchester United and West Ham are currently going head-to-head in what is an extremely crucial game in the Red’s fight to secure Champions League football next season.

United will be desperate to take all three points away from this evening’s game as they look to put their top-four fate back into their own hands.

Despite disaster striking moments before the first-half when midfielder Paul Pogba conceded a frustrating penalty after handling the ball in the box, United have drawn level through boy-wonder Mason Greenwood.

At the turn of the 51st minute, Greenwood has levelled the scoring for Ole Gunnar Solskjaer’s side with a trade mark left-footed finish into the side of the net.

United will now be looking to push on and not only secure the win but also deal fellow top-four rivals Leicester City a goal difference hammer blow.

Mason Greenwood marks his 50th #MUFC appearance with the equaliser!

Can they find the winner?