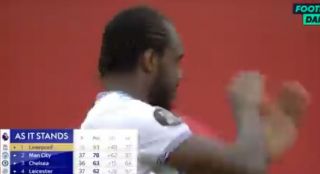 Michail Antonio made fun of Paul Pogba’s handball after scoring his penalty which gave West Ham a first half lead at Old Trafford. The Frenchman noticed.

Antonio stood up to the spot and the in-form West Ham striker sent the ball past David de Gea and into the back of the net.

Rather embarrassingly, Pogba put his hands up to protect his face from the ball despite the effort coming at least 15 yards away from him, so it’s lazy to suggest it was his natural instinct.

The Frenchman knew he messed up and even acted as though he was clearing his face from blood while VAR was being checked.

It doesn’t reflect too well on Pogba and I don’t blame Antonio for making fun of his opponent.

You can see in the video below that Pogba notices Antonio making fun of him! (Footage courtesy of Sky Sports)