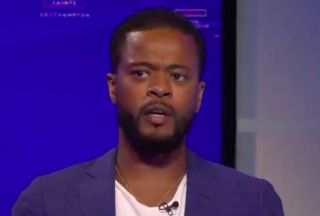 Patrice Evra admitted it was difficult to defend Paul Pogba after his handball allowed West Ham to take a first-half lead against Manchester United at Old Trafford.

Pogba conceded a penalty on the stroke of half-time in bizarre fashion, as he blocked Declan Rice’s shot with his hands, before appearing to pretend that the ball had him flush in the face.

On VAR review, it was clear that the French midfielder made a glaring error and Michael Antonio slotted home the resulting spot-kick.

Many questions will be asked of Pogba in the wake of the incident and there are plenty of fans questioning him over a lack of commitment to the cause.

Evra knows that Pogba made a mistake and he would not get away with it, making a Stevie Wonder-related joke about the VAR officials.

Listen to Evra’s half-time thoughts below, courtesy of Sky Sports:

🗣 "The one in charge of the VAR is not Stevie Wonder" @Evra on Paul Pogba's handball pic.twitter.com/TNYC7YL5GQ

Patrice Evra: "I think Paul [Pogba] knows he made a big mistake — It's difficult to defend Paul on this one but he knows what he needs to do in the second half." #mulive [sky]