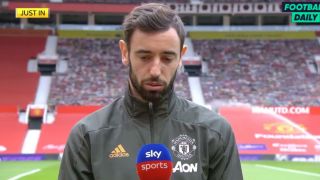 Bruno Fernandes spoke to Sky Sports tonight ahead of the Premier League fixture between Manchester United and West Ham.

The Reds are at home and know a win will see them move three points clear of Leicester City. The two teams face off on the final day of the season and United have a great chance of edging them out of the Champions League places. Chelsea, however, take on Liverpool tonight and will be hoping to win their two games this week, like United.

Chelsea knocked United out of the FA Cup on Sunday, winning the tie convincingly with a 3-1 scoreline, and United failed to show any real promise throughout the game. Little went our way and the players looked tired after just 48 hours rest from their previous game.

This is the first time since Project Restart that Fernandes and his team-mates have had to face the disappointment of losing a game, so he was asked before kick-off about how they will respond.

Watch the pre-match interview below via Sky Sports:

🗣 “It’s our responsibility, you never prepare to lose a game but it happens”

The Portugal interview said: “Our goal is the Champions League, everyone knows that.”