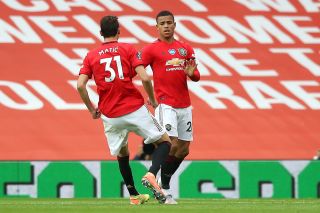 Old Trafford played host to David Moyes’ West Ham United this evening as Ole Gunnar Solskjaer and his United side looked to put their top-four fate back into their own hands.

Going into the game United were the clear favourites to take all three points in a game which appeared to have much more significance in United’s season than it did their opponents.

The headlines prior to kick-off were that manager Ole Gunnar Solskjaer decided to stick by his number one goalkeeper David de Gea amid speculation the Spanish international could have been dropped in favour of Argentinian Sergio Romero.

Alongside De Gea in United’s starting line-up was an unusual back-four which saw Aaron Wan-Bissaka earn a well-deserved rest in place of Timothy Fosu-Mensah.

Solskjaer’s midfield trio consisted of all the usual suspects in Nemanja Matic, Paul Pogba and the tireless Bruno Fernandes.

Further up the pitch saw Marcus Rashford and wonderkid Mason Greenwood on the attacking flanks with the in-form Anthony Martial as the central number nine.

As referee Paul Tierney kicked the game off United appeared to start on the front-foot as they moved the ball a lot quicker than they had in previous games.

Despite seeing Southampton and Chelsea both cause United trouble by utilising an intense press, it became apparent that David Moyes opted against using that approach as his Hammer’s looked to sit further off United.

United were much the brighter side through large parts of the first-half as they looked to break the deadlock early on.

Regardless of United’s positivity disaster struck just moments before the half-time whistle when Fosu-Mensah gave away a free-kick on the edge of the box.

As the free-kick was struck, midfielder Pogba opted to make a strange decision to put his hands up in front of his face, at first glance it appeared the Frenchman had been hit in the face, however, upon closer inspection from VAR it became apparent that it was a blatant handball. Penalty to West Ham.

United fans were not shy in their damning assessment of Pogba’s disappointing decision to handle the ball inside his own box. he United faithful jumped on their social media to tear into deep lying playmaker, some even calling for him to be dropped for the league’s final game.

The in-form Michel Antonio stepped up to take the spot-kick which he went onto put cooly past De Gea. 1-0 West Ham. Disastrous hammer blow for United.

I dread to think what was said in the United dressing room at half-time as the Red’s staff members left the touchline visibly animated.

The second-half saw Solskjaer opt to bring on Wan-Bissaka in place of Fosu-Mensah.

United were saved from their disaster just six minutes into the half as teenage sensation Greenwood levelled the scoring after slotting home a trademark finish which saw Lukasz Fabianski well-beaten. 1-1 United. Game on.

The 18 year old’s latest goal sees him become the first ever United teenage to bag 17 goals in a single campaign. Impressive.

Despite Greenwood’s early equaliser, United failed to make their second-half chances pay as their decent restart appeared to fizzle out.

Solskjaer opted against making a second change until the 85th minute when Rashford made way for Odion Ighalo.

Not for the want of trying, Rashford has a very disappointing evening all round which is undoubtedly why his boss decided to end his night five minutes shy of the final whistle.

Ighalo saw a half-chance fall to him within moments of being the pitch when right-back Wan-Bissaka whipped a fast paced ball into the box. Unfortunately, the enthusiastic Nigerian was unable to direct his effort goalwards as the game remained 1-1.

As the game drew to a close, it must be said, United looked content with a draw which leaves them needing to avoid defeat against Leicester City on Sunday in order to finish fourth.

Pogba will probably do best to avoid tomorrow’s back pages as the impending ‘Hand of Pog’ headlines loom large.

Although Solskjaer would have hoped for more from tonight’s game, it wasn’t the worst result in the world and sees the Reds keep their Champions League fate well within their own hands.

Aside from the overall disappointing display, Greenwood remains a beacon of light as the excitement to see him become a more regular figure ahead of a full season builds.

Solskjaer and his staff will now be keen to refocus the United squad ahead of what is effectively a final day Champions League shoot-out against Leicester City with United needing anything but a defeat to secure top-flight European football next season.