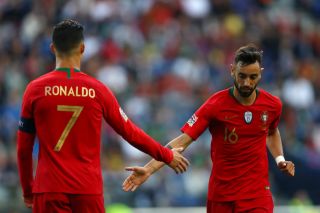 The Portuguese international is currently the most exciting player in the Premier League after settling in super quickly to a Manchester United side in the early stages of transition. Fernandes’ impact has brought up miles closer to where we need to be as England’s biggest club.

According to Record via Sport TV, the midfielder has offered to help Portuguese club Aves, who find themselves in a spot of bother.

Afonso Figueiredo, who previously played with Fernandes in the Portugal U-23 side, has thanked Fernandes, Leicester City star Ricardo Pereira and Portugal international keeper Claudio Ramos for their classy gestures in this time of need.

A report in Correio da Manha helps explain the situation better. Their position financially is so dire that when team bus keys were lost ahead of their clash with Benfica last night players had to travel to the stadium themselves. Another claim, via MaisFutebol, states Aves have not paid wages since March!

Figueiredo’s interview has been transcribed by Record:

“Bruno Fernandes, in addition to being a great player on the pitch, still manages to be bigger outside him. Also Ricardo Pereira (Leicester City), several colleagues of mine, Cláudio Ramos, players who were not indifferent to what is happening here. And I want to thank you for your concern and also for the thousands of messages that we have received in this phase of support.”

Been translated through Instagrams tool so it’s not word perfect but you get the gist. Horrible to see this type of thing happen at any club. pic.twitter.com/DhwEpg9HZV

Not just a good footballer, our Portuguese Magnifico.