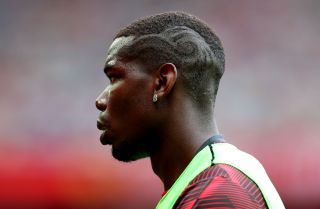 Manchester United are currently embroiled in a tense match against David Moyes’ West Ham United. Ole Gunnar Solskjaer’s side looked like they may go into half-time level at 0-0, however, disaster struck just moments before the break.

West Ham were awarded a free-kick after stand-in right-back Timothy Fosu-Mensah who started ahead of Aaron Wan-Bissaka gave away a free kick on the edge of the box.

As the free-kick was struck, United midfielder Paul Pogba appeared to have been struck flush in the face by the ball.

However, upon closer inspection by VAR, it became apparent that the French World Cup winner had actually deliberately handled the ball in an attempt to block his face.

Referee Paul Tierney wasted no time in awarding the Hammers with a penalty which striker Antonio cooly converted.

United now face a monumental 45 minutes as they look to come back and win the crucial game.

Fans have since taken to their social media to express their discontent with Pogba. It doesn’t make pretty reading, I’m afraid.

Absolutely embarrassing from Pogba. In a match of this importance. I have no words #mufc #whfc

How stupid is that from Pogba. #MUFC

Pogba not concentrating! What the fuck? #MUFC

That’s a disgrace from Pogba. #mufc

What on earth is Pogba doing?!? #mufc