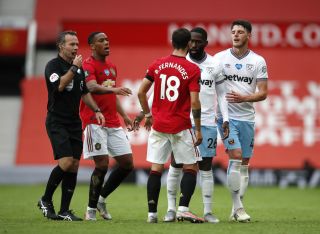 Manchester United finished their home season with a strange stalemate against former boss David Moyes and his West Ham side.

The result rubber stamped the Hammers’ Premier League survival and lifted United into the top three with one game to play.

If you’d offered Ole Gunnar Solskjaer that scenario a few months ago, he probably would have taken it. Despite reverting to a full strength side, it did not seem to shake the Reds lethargy with 18-year-old Mason Greenwood on target again to secure the point – a result which the Reds seemed happy to accept in the final minutes. Here are three things we learned from our final Old Trafford tie of the season.

United’s date with destiny on the final day

I hope you’ve all got good tickers – I’ve got a feeling we’re going to need them! The Reds were held by West Ham at Old Trafford, but still moved into the top four to sit third ahead of Chelsea’s game with Liverpool, level on points with Frank Lampard’s Blues. After 37 games and 3,330 minutes of football, it all comes down to a straight shootout with Brendan Rodgers’ Leicester at the King Power on Sunday. The reward? A place at Europe’s top football table for next season. After slumming it in the Europa League all season, a place in the Champions League looked a pipe dream in December and Solskjaer certainly would have snapped your arm off to be in this position back then. The Reds boss has worked a minor miracle to get the side back into contention but it will all count for nothing if the Reds can’t get over the line.

United only need a draw in the east Midlands but it definitely won’t be for the faint hearted – on this form, Leicester will push the Reds hard with United looking a tired team in need of a break. Strap yourselves in, hold on tight and stay close to the nearest sofa! I’m nervous already…

We have made no secret of Bruno’s brilliance here at Stretty News, with the Portuguese magnifico having a transformative effect on the team since his arrival in January. The string pulling heartbeat of the side, Fernandes has been the conductor of the orchestra, running riot and bending his opponents to his will. However, like the rest of the team there has been a noticeable drop off and his performance against West Ham was his poorest in red so far.

Having been played non-stop without a rest, it is no surprise that Fernandes looks exhausted. Barely got on the ball and when he did he seemed rushed and ill at ease. Even in defeat at Wembley and a below par team performance. Fernandes still made things happen and got a goal but was virtually anonymous here. That said, we can’t be too harsh on the maestro as without him we’d be nowhere near where we are. We can only hope he’s got one more big performance in him on Sunday. United’s over-reliance on him is in danger of becoming chronic.

No strength in depth hinders United

Oh to be a manager. There can be no debate the squad needed rotating, with Solskjaer opting to shuffle his pack in the semi-final in readiness for this one. Despite restoring his main players against West Ham, the team still looked tired but a lack of game changers in reserve means his options are limited. United’s starting XI is very good but there is no strength in depth at all, a pre-requisite for any team that wants to be successful.

It seems like Solskjaer doesn’t trust the squad players he has at his disposal which makes in-game management difficult and forces him to pick players he wants to rest, perhaps against his will – he seemed reluctant to mix it up with re-inforcements against West Ham. In every game since lockdown with the five subs rule, there has been a clear decline in performance when the main players have come off. Put it this way, with the likes of Dan James, Juan Mata and Diogo Dalot, there’s hardly an embarrassment of riches in reserve. This is one of the areas where United trail behind their competitors and it definitely needs to be addressed in the summer.