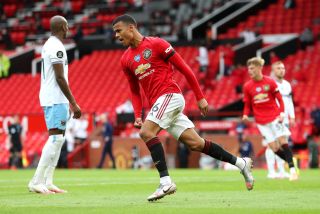 Here are the player ratings from Manchester United’s disappointing 1-1 draw against West Ham at Old Trafford:

Brought in at right-back to give Aaron Wan-Bissaka a rest but was unsurprisingly brought off at half-time. Offered little going forward and was lazy to be caught offside in a dangerous crossing position. Booked. 4

Looked accomplished at the back and did very little wrong despite plenty of West Ham pressure. 6

Some jittery moments again from the Swede at the back but he was progressive and his passes had conviction. 6

Tricky evening against vibrant opposite number  Jarrod Bowen and could have been more direct in attack despite plenty of first-half possession. 5

Took too many touches as United lacked impetus and intensity in the first-half but his passing improved as the game progressed. 6

Inexplicable handball in first-half put United on the back foot. Struggled to make amends in the second-half against a well drilled West Ham unit. 4

Guilty of trying to force the issue and tired as the second-half unfolded. One of his poorest displays and was ill-disciplined to receive a yellow card. 5

Looks in desperate need of a rest after a second lethargic display in three days where he lacked any cutting edge. 4

Victim of a surprise lack of invention and quality from United’s creative players. His interplay for Greenwood’s equaliser was outstanding. 6

Provided first real moment of quality with a trademark finish early in the second-half. 6

Failed to add any attacking impetus after replacing Fosu-Mensah at half-time as United struggled to assert their domination. 5

Wasn’t given enough time to make an impact. 5