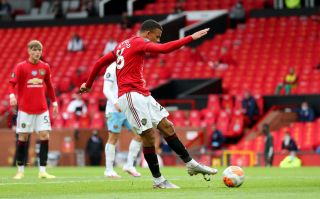 Mason Greenwood. He’s one of our own.

Manchester United’s wonder-boy Mason Greenwood has managed to do something no other United teenager has done before.

The youngster’s latest goal which came earlier this evening against David Moyes’ West Ham United sees him become the first teenager for the club to score 17 goals in a single campaign.

Greenwood dragged his side back level after being 1-0 down against Moyes’ Hammers after executing a trademark left-footed finish into the corner of the net.

The 18-year-old has seen his stock rise dramatically this season after some simply irresistible performances and crucial game winning moments.

Arguably the most exciting teenager Old Trafford has seen since the days of Wayne Rooney and Cristiano Ronaldo, Greenwood is rapidly becoming a fan-favourite.

Greenwood’s goal sees United sneak into fourth place in the league’s table as it currently stands, however, with a final day showdown scheduled for the season’s final day, United will be keen to push on and grab all three points.