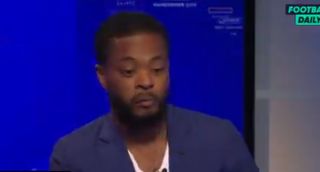 The former Manchester United left-back was ‘disappointed’ with the result and how some of the players performed.

Evra hit out at Pogba’s critics who use ‘harsh’ words to describe his handball which gave West Ham a penalty only for Michail Antonio to net the opener.

Although Evra was quick to defend Pogba, he was equally as quick to point the finger of blame at Marcus Rashford.

Both players had a disappointing evening at Old Trafford — but they were not alone. Bruno Fernandes had an off day and I don’t think Nemanja Matic was very good either, so it’s difficult for this team to click if the midfield is non-existent.

Evra wasn’t happy with Rashford’s performance and it’s a shame the lads wasted such a good opportunity to go three points clear of Leicester City, as seen below in the video courtesy of Sky Sports:

🗣 "People are pointing at Pogba, using harsh words but I didn't see any harsh word on Rashford, he had a poor game today"@Evra is not happy with the performance of Rashford today pic.twitter.com/YiPVs7tu0k

Now we’ll be watching Chelsea take on Liverpool from behind the sofa.