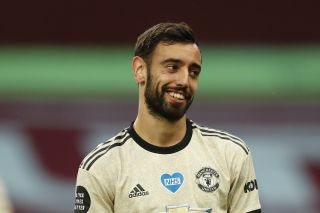 Bruno Fernandes is our Portuguese Magnifico.

Sporting drew their last game against Vitoria 0-0 so Fernandes is still leading the tally for his former club despite leaving midway through the season.

He arrived at Old Trafford and made an instant impact scoring goals and assisting his new teammates at ease. United look a significantly better outfit and players being leggy in the remaining games shouldn’t cast a shadow over that, but it will if we don’t qualify for the Champions League.

Fans will be eagerly awaiting team news to see if Fernandes starts in tonight’s encounter with West Ham in the Premier League.

An important match in which we cannot afford to show any complacency, it gives United a chance to go three points clear of their opponents on Sunday, the final day of our domestic season, so Ole Gunnar Solskjaer ought to play his best player and expect him to grind it out until Champions League football is secured.

It will be hilarious if a United midfielder tops Sporting’s tally come the end of the season. They play Benfica on Saturday and I’d expect them to lose that one.