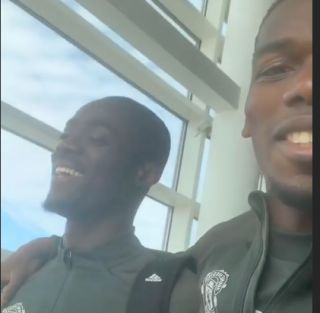 Paul Pogba was first to greet Eric Bailly at Manchester United’s Carrington training facility on Tuesday morning after the defender was discharged from hospital.

Bailly spent Sunday night in a hospital in London after an aerial collision with United teammate Harry Maguire in Sunday’s FA Cup semi-final defeat to Chelsea at Wembley.

The Ivorian centre-back required lengthy treatment and was fitted with a neck brace and oxygen mask before eventually stretchered off the field after a stoppage in play of approximately 10 minutes.

Fortunately, Bailly’s injury is not as bad as first feared and he was in great spirits as he arrived at Carrington and met Pogba.

But he is unlikely to feature in Wednesday’s crucial league game against West Ham at Old Trafford after Solskjaer provided an update in the pre-match press conference.

“I don’t think he’ll be ready for this game. I’ve not seen him this morning yet, this is before we meet the players. I think everyone is available apart from that, no other injuries from last week,” Solskjaer said, as quoted by the Manchester Evening News.

We expect Victor Lindelof and Harry Maguire to assume the familiar centre-back pairing in a return to the more suitable four-at-the-back formation against the Hammers.

Pogba took a video of himself greeting Bailly at the training ground entrance and posted on his Instagram story, which you can see below, via Utdreport:

Pogba welcomes Bailly back to Carrington this morning 🤝 pic.twitter.com/GOuqEKB7di