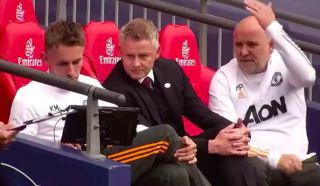 Chelsea took the lead on the stroke of half-time after some abysmal United defending that warranted admonishment.

Despite advanced warning, Victor Lindelof allowed Giroud to beat him to the ball after a trademark front post run from the French striker.

David De Gea, who made a reprehensible error for the second goal, was also at fault for allowing the ball to trickle into the net.

United’s coaching team of Ole Gunnar Solskjaer, Kieran McKenna and Phelan all watched a replay of the goal on a pitch-side monitor with Phelan clearly frustrated at the manner in which United fell behind.

See the reaction from Phelan below, courtesy of the Emirates FA Cup: