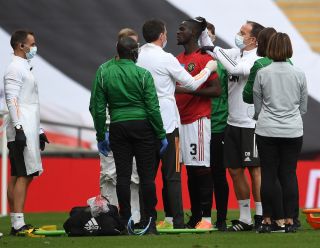 Ole Gunnar Solskjaer has confirmed that Eric Bailly is unlikely to be available for Wednesday evening’s Premier League clash against West Ham at Old Trafford.

Bailly was forced to hospital after a nasty head collision with Manchester United teammate Harry Maguire in Sunday’s FA Cup semi-final defeat to Chelsea at Wembley.

The Ivorian defender required lengthy treatment on the field, and was fitted with a neck brace and oxygen mask while the game was delayed by around ten minutes.

Fortunately, Bailly was discharged from hospital on Monday and the injury isn’t as bad as first feared.

But Solskjaer doubts he will be ready for United’s crucial game against West Ham as the Reds look to edge a step closer to Champions League qualification.

“Eric stayed down in London for all the checks, so he’s done all the checks,” Solskjaer said in Tuesday morning’s press conference, as quoted by the Manchester Evening News.

“I didn’t see him yesterday and he’s followed the protocols that are needed.

“I don’t think he’ll be ready for this game. I’ve not seen him this morning yet, this is before we meet the players. I think everyone is available apart from that, no other injuries from last week.

It’s encouraging that Solskjaer stated that there are no new fresh injury concerns from last week, as it could imply the return of left-back Luke Shaw.

Shaw has missed the last two games with a swollen impact and his absence has been felt with Timothy Fosu-Mensah and Brandon Williams failing to excel in the role.

The 25-year-old became an undroppable in United’s 19 game unbeaten run before the injury and could play a key role in helping the Reds securing a top four finish if available.