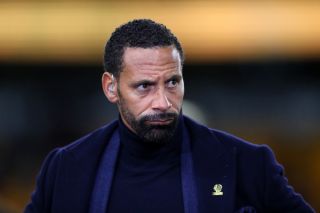 De Gea was chastised by large sections of the fanbase in the wake of the defeat, with the Spaniard responsible for errors in at least two of Chelsea’s three goals.

Olivier Giroud’s shot should have been kept out on the stroke of half-time, and the effort to save Mason Mount’s innocuous strike just after was reprehensible.

De Gea’s confidence is clearly shattered at the moment and more and more inexcusable errors are starting to creep into his game.

United great Ferdinand says he was flabbergasted at De Gea’s mistakes, and he cannot be defended for his performance.

“When people make mistakes, they’re open to criticism. That’s just natural, that is just how football is,” Ferdinand told BT Sport, as quoted by the Mirror.

“David de Gea is no exception. He’s made mistakes, glaring mistakes in some big games, notably the game against Chelsea in the semi-final at Wembley.

“Yes, he should be doing better. I have played with David, he’s his own biggest critic.

“He’ll be sitting at home mulling over these, going through the situations and making sure that he tries to get rid of these mistakes that he is committing at the moment.”

“I watched these games with my boys at home and I was flabbergasted to see them go past David because he’s a top-drawer goalkeeper,” Ferdinand said.

“It is disappointing really, as a Manchester United fan you want to defend your player but at the moment he is not in a position to be defended in that respect.”

What is most concerning about Sunday’s performance was that it was not simply an aberration. De Gea’s form has declined considerably over the last 18 months which must be a worry for Ole Gunnar Solskjaer.

It’s easy to forget De Gea was named United’s Player of the Year in four out of five seasons between 2013 and 2018.

Solskjaer will still harbour hopes that De Gea can rediscover the form that made him such a fan favourite at Old Trafford, but may be tempted to take the number one out of the firing line for the final two league games where United can secure Champions League qualification.