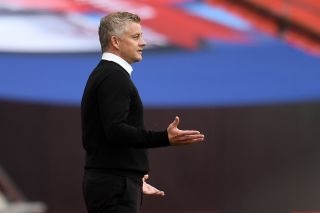 Manchester United are set to face-off against West Ham United on Wednesday in what will be the Reds’ penultimate Premier League game of the season.

United currently sit in fifth place in the league and are separated only by goals scored from Leicester City who remain in fourth spot. The Reds will be hoping to pile the pressure on Brendon Rodger’s Foxes with a win against West Ham before the two sides meet on the final day.

Ahead of Wednesday’s pivotal clash at Old Trafford, we have predicted who United fans can expect manager Ole Gunnar Solskjaer to name in the starting line-up.

Controversial I know. But surely not even the happy-go-lucky Solskjaer can let David De Gea’s abysmal FA Cup semi-final display go unpunished. I wouldn’t be surprised to see second choice Romero get his first run out since United’s Europa League 5-0 win over LASK back in March.

In desperate need of a rest, but who else is there? I fully expect to see Solskjaer urge his first choice right-back to soldier on through to the end of the season.

No brainer. With fellow centre-back Eric Bailly suffering a horrid head injury on Sunday, I fully expect to see the Swede (no pun intended) start in his usual role at the back on Wednesday.

Similarly to Lindelof, with limited alternatives available at the back for Solskjaer to pick from, I see no changes in the usual centre-back partnership of Maguire and Lindelof.

With no word on first choice left-back Luke Shaw’s current state, it is very likely youngster Williams’ could see his second consecutive start on Wednesday.

Since signing a new deal until 2023 earlier this month, the United faithful haven’t seen much of the passionate Scot. I think Wednesday could be the game in which McTominay gets his chance.

Having started Sunday’s FA Cup semi-final against Chelsea on the bench, surely the French World Cup winner can expect to go one better on Wednesday.

Impossible to leave out at the moment it seems. Solskjaer appears adamant to push his Portuguese Magnifico through right to the bitter end. I fully expect to see the 25-year-old start at the tip of a midfield diamond of three against the Hammers.

Despite enduring a fantastic restart Greenwood has failed to net in his last two outings, granted, one of which was from the bench in a game which his side never looked in. However, the young superstar will be keen to get back among the goal contributions. I wouldn’t be surprised to see Solskjaer stick with his young prospect after rubbishing talk that he may suffer burn-out.

Arguably United’s best left-sided attacker Rashford is likely to start ahead of the struggling Daniel James. Looking to extend his impressive goal tally of 22 goals in all competitions this season, I would fully expect to see the young Englishman line-up in his familiar role on Wednesday.

Experiencing his best season to date, Martial will be hoping to finish it off with a bang and there is no better time to do it than in the second to last game of the season when his boss will be begging for goals. Despite fan-favourite Odion Ighalo ready and waiting in the wings, I expect Solskjaer to go for the jugular on Wednesday and deploy maximum fire-power before opting for substitutes later on. I fully expect the young Frenchman to start the game in his familiar number nine role. Don’t be surprised to see him get on the scoreboard once again.