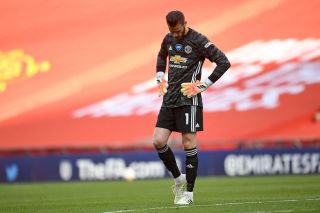 De Gea was heavily criticised for Sunday’s disastrous performance against Chelsea in the FA Cup semi-final at Wembley, where he made two glaring errors.

The Spaniard should have done better to keep out Olivier Giroud’s opener on the stroke of half-time and his effort to stop Mason Mount’s innocuous strike was indefensible.

United’s number one was inevitably chastised by large sections of the fanbase on the final whistle, with many suggesting his time was up.

The decline of De Gea has been quite staggering given he was the recipient of United’s Player of the Year Award for four out of five seasons from 2013 to 2018.

Unfortunately, Sunday was not an aberration as his form has been of concern for quite some time now.

But United great Scholes has sent a defiant message to his followers on social media about the current form of the goalkeeper.

Scholes’ Instagram story read “Without him Utd wouldn’t have finished in the top 10 in the last six years… he’ll be back.”

We expect Ole Gunnar Solskjaer to give De Gea the chance to redeem himself in the closing games, even though bringing in Sergio Romero could be advisable given the shattered confidence of United’s number one.

Overall, De Gea has been United’s best player in the dismal post Sir Alex Ferguson era, but his decline in form now means United fans have every right to worry about their goalkeeping situation.