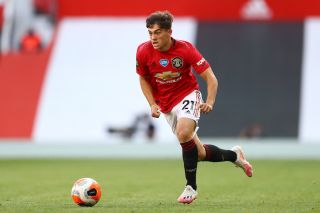 A section of Manchester United fans are calling for Daniel James to be sold to none other than bitter rivals Leeds United. Madness.

Leeds United saw their quest for promotion back to the Premier League for the first time in 16 years finally confirmed last Friday when fellow contenders West Brom suffered a shock 2-1 defeat to Huddlesfield Town.

Leeds looked set to sign James in January 2019 from fellow Championship side Swansea for a reported £15m as per BBC Sport.

However, the deal fell through at the very last minute which paved the way for rivals United to seal the deal the following summer.

Despite a promising start to life in Manchester at the beginning of the 2019-20 season, James has failed to impress the United faithful in recent times.

A section of fans have now lost their patience with the Welsh 22-year-old to the point where they’re calling for him to be sold to Leeds United.

Dan James is like a bull in a cho a shop, poor player not good enough for United, sell him back to Leeds !

Ey I’ll tell you what Gallagher. Now I know why Leeds didn’t sign Dan James last season. You wanted to let him go to United instead and be absolutely horse shit! 🙌🙌😜😜

Send Dan James to Leeds. Them boys really wanted him

Dan James is useless, he has one attribute that he doesn’t even use. Should have signed for Leeds

Dan James is finished, we should be asking Leeds if they still want him🤔

Give Leeds Dan James as a welcome back present

I’ve seen enough of dan James already…. off you pop to Leeds or something lad 👍🏻

Hate to say it, but Dan James not good enough for United, I’d seriously consider loaning him out to Leeds next season