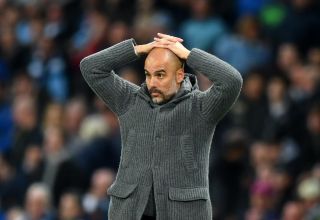 Manchester City boss Pep Guardiola could be looking to shock the footballing world as he prepares a second attempt at securing the services of Manchester United flop Alexis Sanchez.

It is no secret that Manchester City were pipped to the line in 2018 when the Chilean opted for Red over Blue after departing Arsenal.

However, according to Chilean outlet La Cuarta as quoted by Sports Witness, Guardiola appears not yet ready to give up in his pursuit for the 31 year old attacker.

Sanchez’s move to United has been one to forget for executive vice chairman Ed Woodward. After a difficult start to life in Manchester, things didn’t get easier for the once world-class wide man. His under performances which saw him score just once for the Reds eventually led to him being loaned out to Italian side Inter Milan.

Still currently in Milan it is widely believed that Sanchez may never feature for his parent side United again.

It is understood that Guardiola and Manchester City have ‘made contact’ with Sanchez’s representatives to ascertain the conditions required to lure him from his United nightmare.

Manchester City are believed to have an eye-watering £150m summer transfer budget set aside for Guardiola. Some of those funds could be used to bring arguably the biggest flop in their rival’s history to the Etihad in a transfer which would shock the footballing world.

Read more: Man United have been worried about David de Gea&#8217;s form for quite some time