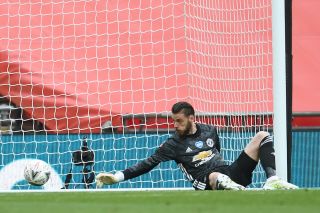 Speaking as someone raised in Canada who has kept goal in both hockey and football, a commonality between the two sports is that a goalie’s play can bolster or shatter his side’s confidence. While Manchester United did not start their FA Cup semi-final against Chelsea very well, there was no growing into the game once David de Gea failed to prevent two eminently stoppable goals on either side of the intermission. That truth made it extremely painful to listen to Jon Champion and Stewart Robson attempt to posit any and every other reason to explain the Reds’ defeat.

The pair alluded to the emotional let down caused by Eric Bailly’s apparently serious head injury. Admittedly, such a scene can affect a squad but it is up to the leaders on the pitch and the dugout to inspire the directly opposite response by urging the squad to play for their fallen comrade. De Gea is a leader. He needed to demonstrate the focus and intensity to lift the outfield players’ spirits.

United had its moments late in the first half with De Gea’s first howler coming against the recent run of play. Some, including the manager, seem to be willing to let that one pass, yet the keeper had his right hand behind the redirected ball, one that was hardly a screamer. He should have kept it out.

When Mason Mount’s tame effort from a poor Brandon Williams pass into the centre of the pitch slipped under De Gea’s fingers one minute after the restart, I can promise you the players on the pitch were not thinking about Bailly. They were doing their best not to stare at the bearded stranger in the purple kit.

Consistent with his belief in sticking with the hot hand, Robson refused to criticise Solskjaer for not starting his normal cup keeper, Sergio Romero. However, the Argentine’s been virtually flawless when manning the sticks for United, making both saves he should and some he shouldn’t. The same can’t be said for United’s Spanish number one. The best thing that can be said for De Gea is the match at Wembley wasn’t a Premier League outing. His two howlers won’t be added to his league-worst three errors leading directly to goal.

Robson also wanted it both ways regarding Ole Gunnar Solskjaer’s squad selection. He repeatedly mentioned the Reds’ sluggish starts against both Southampton and Crystal Palace, inferring the team was showing complacency. Then he criticised the manager for ringing the changes rather than riding the momentum of a double-digit unbeaten run.

Surprisingly, neither commentator mentioned Tottenham’s just-completed 3-0 victory over Leicester put United in the driver’s seat for a Champions League place, leaving the Mancs and Foxes level on points and goal difference with Ole’s lads holding a match in hand. Keeping his preferred XI fresh for the midweek tilt versus erstwhile boss David Moyes and high-flying West Ham was a crucial decision. An FA Cup victory won’t deter critics from panning the club if it fails to qualify for the Champions League. Ask Louis van Gaal.

There is no arguing. United weren’t the better side on the evening. The other ten men and substitutes must accept their share of responsibility and the club must continue to win and lose as a team. Yet, United weren’t the better side for significant stretches against So’ton and Palace in their previous two matches, nor against Spurs when they resumed the campaign. It shouldn’t be forgotten that De Gea let in an easy one against the North Londoners, too. Nevertheless, the point remains. Without his two gaffes in this match, we might be discussing a side who once again fought through their struggles to snatch a result [or at least force extra time and penalties].

Yes, Maguire also put one into his own goal, a play on which De Gea could do little, but Anthony Martial earned a penalty late and was denied another [or a free kick on the edge of the box] earlier in the half. On any other day, United might have persevered, believing in themselves. Betrayed twice by their keeper, however, this time, they could only believe they were fucked.

Between now and Wednesday, when three points against the Hammers will put United clearly in the driver’s seat and Leicester in the boot for a Champions League place come their season-ending match on Sunday, Ole Gunnar Solskjaer probably won’t sleep well. There are so many questions.

How can he not help questioning his faith in De Gea? Should he start Romero on Wednesday as both an apology to the Argentine for his benching at Wembley and a warning to the Spaniard that his continued lack of concentration cannot be tolerated?

Further, should he ask Ed Wooodward to cut off negotiations with Sheffield United to extend Dean Henderson’s loan for a third season?

Going into the West Ham match, what message does it send his squad if he gives De Gea yet another opportunity, as his post-match comments suggest he will do? Will they perceive it as faith and loyalty or will they wonder if certain players are not held accountable?

Such questions illustrate the doubt Ole must feel. Unfortunately, there is no mask or vaccine to prevent that doubt from infecting the squad at the worst possible time.