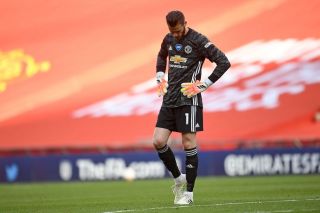 If six months ago you offered Manchester United manager Ole Gunnar Solskjaer the chance to play Chelsea in an FA Cup semi-final with the winner set to play Arsenal in the final just two weeks later, he’d have snapped your hand of. However, after what was quite frankly an abysmal display from his Reds in yesterday’s second FA Cup semi-final, arguably their worst all season, Solskjaer won’t be featuring in the oldest domestic cup competition’s final this season.

Solskjaer named a strong side for the semi-final which featured five changes from the team which narrowly beat Crystal Palace earlier in the week.

Unfortunately the gamble to deploy the rarely seen system of five at the back didn’t pay-off for Solskjaer as his side looked all at sea from the first whistle.

Despite United’s struggles earlier on, at 0-0 the Reds are always in the game, however, just shy of the half-time break Chelsea veteran striker Olivier Giroud opened the scoring with a weak effort which managed to find itself beating De Gea.

After coming out from the half-time break 1-0 down, Solskjaer would have been hoping for a positive reaction from his side. Sadly, his prayers were not answered. In fact, the Norwegian’s first-half disappointment would have undoubtedly turned to frustration as Chelsea midfielder Mason Mount doubled the Blues’ lead moments after the restart.

De Gea again was at fault for Chelsea’s second and United remained staring down the barrel of a loaded gun with almost everything against them.

They say being a goalkeeper is the loneliest place to be on a football field, unfortunately in De Gea’s case, that lonely feeling is one he has come to know all too often in recent seasons.

With time seemingly running out for the once great Spanish international, surely the United hierarchy will be actively seeking a solution to their club’s goalkeeping issues.

According to The Athletic, the club has been worried about their number one’s form for quite some time now.

After United’s 5-2 victory against Bournemouth earlier this month, a source within the club reportedly predicted De Gea is going to cost United dearly.

In light of Bournemouth’s Junior Stanislas shock opener against the Reds, the source said: “It’s going to cost United in a final. You can see it a mile off.”