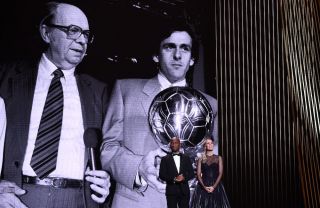 Only a fool wouldn’t recognise Bruno Fernandes’ impact since arriving at Manchester United in January. He galvanised the club, focused the attack and renewed supporters’ hopes. We’ve gone from feeling hopelessly adrift to daring to dream of a Premier League title in 2020/21. In the Church of the Stretford End, the Portuguese performed enough miracles that Old Trafford faithful now accept him as their lord and saviour.

That’s why I immediately laughed when I saw, under the comment “Justice for Bruno Fernandes”, @ManUtdMindset’s retweet of France Football’s announcement that the magazine would not award the Ballon d’Or in 2020 due to the pandemic interrupting some leagues, cancelling others and postponing the European Championship.

The joke is obvious. Due to the Reds’ standing in the Premier League, where their two chief rivals stand out — Liverpool running away with the domestic title and Manchester City escaping the justice of UEFA’s European ban while remaining in with a very strong shout to win this season’s Champions League — fans outside United’s circle won’t give Bruno the time he deserves. If he can’t hoist the trophy, no one should.

Except, in the spirit of fair play, someone should. COVID-19 didn’t end football. It’s a sizable obstacle in the game’s path, to be sure, but the game is working around the daunting obstacle. Yes, games are played behind closed doors with the lockdown’s interruption affecting quality of play, but the players compete under uniquely stressful conditions. Some leagues threw in the towel but many persevered.

Perhaps most importantly to France Football, Ligue 1 closed up shop. The Eredivisie also stood down, as did Scotland. On the other hand, lesser competitions like the Russian Premier League and Portuguese Primeira Division soldiered on. Key to the Ballon d’Or decision, UEFA’s top four leagues, the Premier League, Bundesliga, La Liga and Serie A are back up and running.

The last time a player from outside those four competitions won the prestigious award was 1991, when Olympique Marseille’s Jean-Pierre Papin stood highest on the podium. Only seven other times in the Ballon d’Or’s 65-year existence has an outsider been honoured. Dynamo Kyiv’s Igor Belanov won in 1986 and Oleg Blokhin in 1975, also representing the Ukrainian legends. Johan Cruijff won with Ajax in 1971, Florian Albert with Ferencvaros in 1967, Eusebio with Benfica in 1965, Lev Yashin for Dynamo Moscow (1963) and Josef Masoplust at Dukla Prague (1962).

Is there a player from outside those competitions who deserved to make the now moot short list in 2020? Actually, there is. Kylian Mbappe had 30 goals and 17 assists (Transfermarkt) in 33 matches for Ligue 1 leaders Paris Saint-Germain before the French top flight was cancelled.

It would be a shame if France Football suspended the award to protect a Frenchman, especially when it might have blown up in their faces. PSG face Atalanta in the Champions League quarter finals in August. Imagine the story if Mbappe, after sitting on the sidelines for months while others played, led Les Parisiens over La Dea and then onto full European glory. The football media would clamour to anoint him with the Ballon d’Or. In fact, if that exact scenario occurs, football writers around the world will be mocking FF for its decision.

Should PSG and Mbappe fall by the wayside, there would still be deserving candidates. Lionel Messi (30G, 26A) and Cristiano Ronaldo (32G, 7A) continue to dominate for Barcelona and Juventus respectively. Messi would have needed a European crown to claim a seventh lump of gold while Ronaldo, who won his first with United, couldn’t have drawn the votes to match his rival’s sixth without the Champions League triumph the Old Lady signed him to achieve.

However, there are other candidates in this campaign who stand at least level with our generation’s two footballing demi-gods. Bayern Munich striker Robert Lewandowski arguably surpasses them with 51 goals and 6 assists for die Roten. So does Erling Haaland, who moved from Austrian champions RB Salzburg to Bundesliga challengers Borussia Dortmund in January without slowing down. The teenager currently boasts 44 goals and ten assists on his campaign but only Lewi remains alive in the Champions League.

Finally, there is the one candidate whose presence on the shortlist would make United supporters happy with France Football’s decision. Were City to finally complete their purchase of a European crown this season, Kevin de Bruyne would merit consideration, although not quite the honour itself. At the moment, the creative midfielder at the heart of Pep Guardiola’s attack logs 13 goals and 21 assists in 44 appearances.

And Bruno? United’s creative muse needn’t stand aside for his sky blue rival. Fernandes’ Red total is only nine goals and eight assists but his combined Sporting/United record stands at 24 and 22. A Europa League title could’ve pushed him onto a few ballots, although winning the award would have been the longest of long shots.

Maybe Manchester United fans can claim justice for Bruno (and KDB) but the absence of a 2020 Ballon d’Or is a disappointing injustice for many deserving candidates.