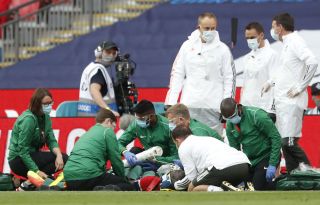 Manchester United did not get the result they were hoping for in yesterday’s FA Cup semi-final after suffering a rather humiliating 3-1 defeat to domestic rivals Chelsea. United’s afternoon suffered even more misery when flamboyant centre back Eric Bailly was forced off the field of play with what looked to be a very concerning head injury.

Bailly collided with defensive partner Harry Maguire just shy of the half-time break which resulted in both players requiring treatment.

It was clear that Bailly had come off the worst out of the pair after medical staff helped him to the sidelines where he once again fell to the ground.

The scenes inside Wembley Stadium were worrying as play was halted for a good 10 minutes whilst Bailly received ongoing treatment with both sets of players reluctant to continue.

The 26 year old Ivorian defender was eventually escorted off on a stretcher and taken straight to a nearby hospital where he received further treatment.

With very limited information coming out after the game offering an update on Bailly’s status, concerns among fans had began to increase.

However, good news was finally released earlier this afternoon after the man himself took to his social media to offer a welcomed update on his situation.

Result aside, everyone is glad the entertaining defender is okay and we look forward to seeing him in action again very soon.

Thank you for all the messages of support. I am ok, it was just a scare. I feel the pain of yesterday’s defeat even more. But we have to get back up and refocus on the two big games we have this week.#Thanks ❤️ pic.twitter.com/y5OqgpDC9H