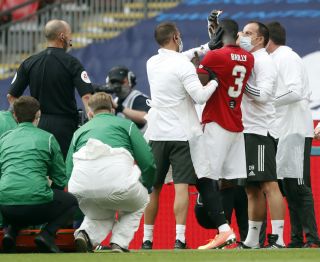 Eric Bailly is due to return to Manchester today after being given the all-clear after suffering a head injury at Wembley on Sunday.

The Ivorian centre-back suffered a nasty gash and concussion after clashing with Manchester United team-mate Harry Maguire in the FA Cup semi-final.

He initially walked off the pitch but then looked in serious distress. The medics quickly took to the pitch before Bailly was put on a stretcher.

Bailly had concussion and a pain in his neck as a result. He was sent for a scan and was moved from a private hospital to St Mary’s in Paddington for thorough checks.

However, Football Association rules on concussion are rightly strict and Bailly will not be available for United’s final two games, as per the Mirror.

This is a huge blow to Bailly, who has been unlucky with injuries since joining United, so we hope to see him in the second leg against LASK in the Europa League.

After the FA Cup semi-final defeat, Solskjaer said (via MEN): “It had a big impact on the game, Eric played well and we conceded just after the restart and that was very disappointing. Eric was a big part of us not having any chances against us, really.

“Obviously the long lay-off was a big test and we didn’t pass it, because we lost our concentration and conceded a goal before half-time, which is disappointing.”

Before getting injured, Bailly was making fun of Chelsea. See the highlight below to see his clever but courageous flick.