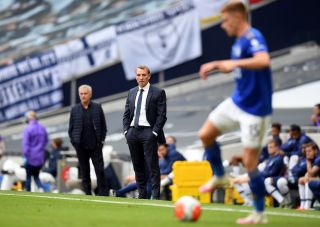 Leicester City manager Brendan Rodgers shrugged off Sunday’s 3-0 defeat by Tottenham Hotspur and believes next week’s Premier League finale at home to Manchester United is “perfect” as they try to clinch a Champions League spot.

Before we go any further, I can’t help but calling Rodgers out for talking rubbish. How is that the perfect scenario for Leicester — playing against an in-form United side, knowing they probably can’t afford to drop any points when their record of late has been questionable to say the least?

They remain fourth but are level on 62 points with fifth-placed United who can take a three-point lead if they beat West Ham in their game in hand on Wednesday. That’s a must win for United and the players will be determined to avoid more disappointment after losing Sunday’s FA Cup semi-final against Chelsea.

Leicester won eight successive league games between October and December, back when some football pundits were prematurely asking whether they would be challenge Man City and Liverpool for the Premier League title, but those hopes were short-lived and now they run the risk of crumbling and not even finishing in the top four.

They have left their foot off the gas, winning only five times in the league in 2020, but Rodgers is digging for positives when there aren’t any for the Foxes after suffering a hammering against Spurs.

However, Rodgers believes it will all come down to the last game of the season.

“It will be absolutely perfect. It will be all in,” Rodgers said, as per Leicester Mercury. “The players have been fantastic. We’ve got one last opportunity. Whatever the result was today, we needed a result next week.”

Read more: Brandon Williams explains how he joined Manchester United as a 7 y/o